Sitting in near complete darkness, it’s early in the morning and the sun hasn’t risen yet. Steam from my coffee gently rises to my face, a -12F degree morning waits to greet me outside, it can wait. Reflecting on what I had experienced in the last five days has slowed my thought processes to a dreamlike state. Not to long ago I was running around the desert southwest savoring the views, running the trails and pushing the limits of what I thought my body was capable of with little regard for what tomorrow will bring, pretty incredible.

The sun has yet to rise, I’m standing at the start line in below freezing temperatures waiting for the 50 mile race to start. With a stern voice the race director counts down to one and they were off and with them my friend vanished into the darkness in a sea of headlamps down the trail as I cheered her on, not to be seen again for over 11 hours. I now have an hour to sit and wait, to think about my race that will begin shortly. Wandering around the desert in the darkness with others that too were anticipating our race that was soon to come, we watched the eastern sky slowly glow as the sun rises as it can only in the desert and it was magical. 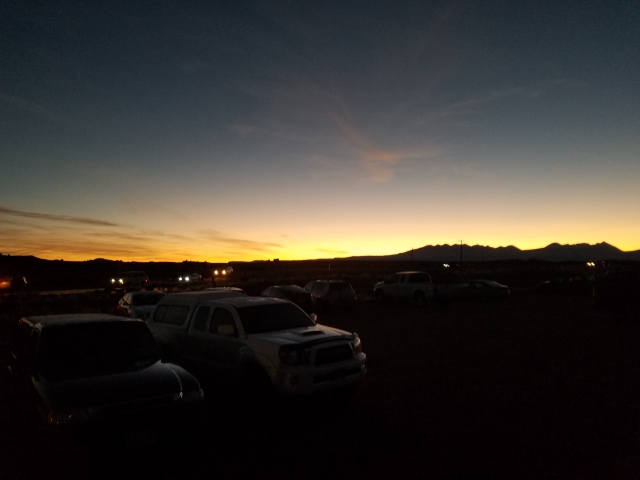 Pacing around knocking the numbness out of my feet, I was contemplating my own insecurities and doubts about what I was attempting to do. This was only the second time that I would be racing in an ultramarathon, the first being a timed event where you would run for a set time and who ever ran the farthest was the winner. I ran 32.27 miles in that race but this was different, this was a 50k and it would be my first 50k length race as well as my first long distance trail race outside of Alaska and I had no idea what to expect.

The Dead Horse Ultra trail race is ran in the desert of the Gemini Bridges just north of Moab, Utah and is sandwiched between Arches National Park, Canyonlands National Park and Dead Horse State Park. It’s beautiful country and if you like the desert this is your Valhalla, running the trails around there is nothing short of spectacular.

Sunrise was a show of its own as the sun was gently rising behind the La Sal Mountains to the east, bathing the desert and cliffs around us in shades of orange and red intensifying the stark beauty of the land. Standing at the start line the rising sun was the countdown clock and right when the sun peeked over the horizon we were off on our own adventure, frozen feet and all. The starting lines of trail races are so much different from that of their road brethren. The starts at trail races are much more relaxed and casual, where in a road race there isn’t very much chatter at the start with runners focused more on their race than the people around them where as in trail races runners continue conversations and light banter throughout the race. 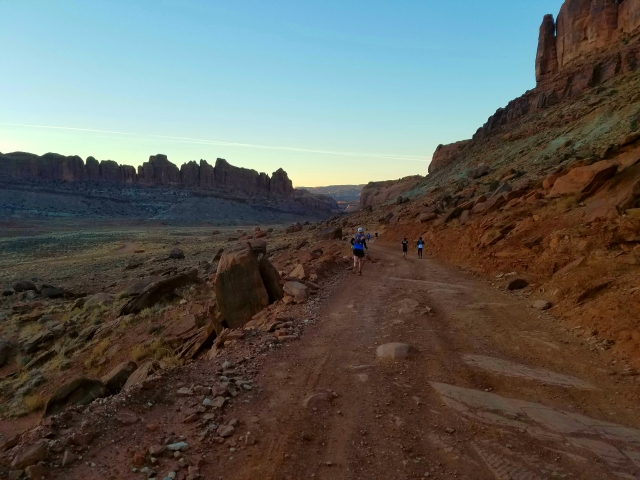 After about half a mile of easy running along the Gemini Bridges dirt road it turned and headed for the sky and for the next mile and a half all I was looking at was the ground I was running up waiting for the searing pain in my lungs to subside. Fortunately the road falls away soon after for the next three miles letting you recover and get your legs back just in time to reach the first aid station and charge up the next short but steep climb that would place us on the desert plateau and the start of the incredible singletrack that was twisting and turning its way across the open desert.

There’s a sense of magic when you run through a beautiful desert, you feel included in something more than what you see. It’s a world of simplicity surrounded by the chaos of our regular lives and this desert is truly beautiful. Hitting the aid stations and check in’s I was greeted by helpful, smiling people who made all the pain I was going through so much better. Around 13 miles into the race I realized I had gone out to fast, I was trying for a 5:15 but at 13 miles I was on pace for a 4:30 and that was way to fast. I knew at some point I was going to blow up, it was just a matter of time and all I could do was try to minimize the damage.

When I arrived at the half way aid station at mile 15 I had scheduled myself a small break eating what I could eat, drinking what I could drink which was mostly de-fizzed Coke, bananas, quesadillas and some other sweet stuff I can’t remember. This seemed to help but facing the inevitable of the pain that was soon to come I ran off  down the trail. I was slowing down, being more deliberate to conserve energy, I was still hopeful of reaching my max time of 5:35 and I would have loved that but by mile 18 my hamstrings were spasming and the occasional cramp was beginning to appear.

After mile 22 I was run walking, running when I could mostly on flats and down hills and walking all the climbs to conserve energy for my cramping muscles. In a few more miles my shin muscles joined in on the revolt and would cramp up every time I climbed up rock steps or small rises, but they weren’t very bad.

At the last aid station at mile 26 I drank water and pickle juice to get more sodium back into my body and it wasn’t as if I was neglecting my nutrition, I was popping salt tabs, drinking electrolyte replacement fluids and eating energy gels up until around 20 miles. After that I fed at the aid stations and continued with my fluid intake, fatigue and conditioning was the cause of my dilemma.

The last 4 miles of the race follows a heavily used jeep road with deep sand in sections that gently rises as you inch closer to the final mile long climb of the day. I happily walked up that final climb so I could enjoy the last 2 miles of decent to the finish line. Strangely I was feeling better, my legs weren’t cramping as much as before and aside for that I felt great! I knew I wasn’t going to finish under either of my target times so I relaxed, smiled and enjoyed the rest of the day jogging out the last of the race.

Crossing the finish line I still managed to run a PR, a personal record for the 50k distance of 5:46:54. I was happy, I love what I’m doing and after coming to a rest after the finish I stood up straight, looked around at the world around me, the smiling, happy people, the relationship we all share with one another running trails and I know that this is where I belong.