I don’t get up at 6:00 in the morning for very much, if anything at all and yet here I am sitting on the couch barely able to focus on the coffee cup less than three feet from my face. I had little to no motivation to do anything at this hour aside for trying to sip my coffee without giving my mouth 3rd degree burns, but in two hours I would return to the Equinox Marathon after a 8 year absence with a new mentality and a clarity on my Universe I had never had before.

Slowly and purposely I managed to get dressed, after having laid out everything I was planning to wear today the night before in anticipation of my lack of consciousness in the morning. Having the pre race anxiety also didn’t help and all I could manage for breakfast was a cup of coffee and a breakfast bar before heading over to the race for the mornings festivities. Driving to the start line all I was thinking about was the first 8 miles, how I planned to run it and the fear that I would go out to hard or even worse, go out to slowly.

With temperatures hovering just under 40 degrees and partly cloudy it looked to be a perfect day to run, especially since it wasn’t raining for once! Pre race meeting over, warm up jog over, standing at the starting line waiting to get on with the running, yep I’m ready for what’s to come. With the countdown beginning the body language of everybody around me changed in a blink, what was happy, leg loosening indifference, laughing and chatting atmosphere had abruptly became cold, silent and a gentle side of tense. 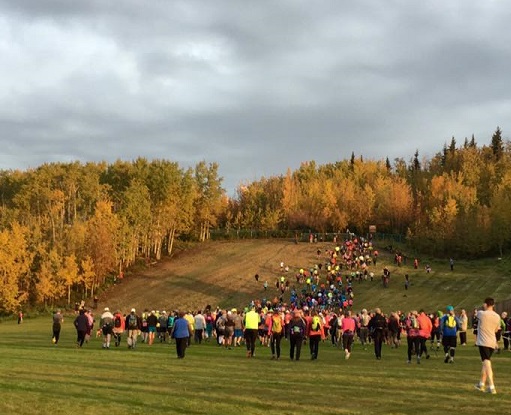 Just like that, one moment was  silent, cold and still and the next I was surrounded by a mass of movement, chaos bounced and swayed around me as we charged to the hill we had to sprint up for the beginning of the race. Once on top of the hill and running up a grassy slope everybody seemed to calm down and relax, chatting between runners had picked back up and an air of serenity seemed to envelope the trail. Everybody was happy to be settling in for a wonderful morning of trail running.

I was lucky, I had timed my start pretty well and entered the trail system with few runners around me so I didn’t have to alter my pace or change my path for anybody around me. I focused on the world around me, my body, breathing, my effort, it felt good to be racing again after having not raced since the end of July and only training for the last month and a half. I ran steady, unrushed and slightly conservative finding this works best for me during the first 8 miles of the race. It is so easy to waste unnecessary energy in the beginning of the race before getting to the actual climbing that waited for me at mile 10. 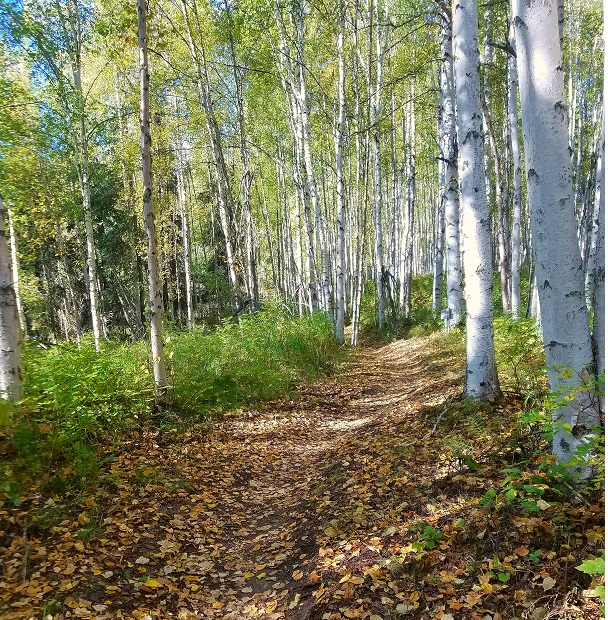 When I got to the 8 mile point I found that I was right on time if not a few minutes ahead of my projected time, not to fear though I would give that time right back between mile 12 to mile 15. I actually hiked less than I had expected up to mile 12 when I got to the Zipper portion of the trail, but from there it was a 25% grade of short switchbacks that sucked the life from my legs and I spent the next mile trying to get them to recover. By the time I did recover I had climbed up and around the multitude of radio and cell phone towers that adorn the top of Ester Dome.

The roughly 4 miles of out and back is unrelenting with short steep punishing climbs and down hills which are less than rewarding. Once I finally made it to the turnaround at the bottom of a descent, I stopped at the aid station for some banana and PowerAid since I felt my sugar levels beginning to drop, eating only a small breakfast bar earlier is biting me in the butt. Just before leaving the aid station I grabbed a handful of gummy bears mostly out of a reflex to take in some quick sugar, big mistake………

The climb out of the aid station turn around isn’t mind blowingly difficult but with a mouthful of gummy bears I couldn’t get in enough air as I was taking in deep breaths with the exertion so I ended up walking while I chewed and as runners were passing me causing me to fall back in the standings and it was also causing me to lose time. You’re probably thinking why didn’t I just toss the candy to the ground, spit out what was in my mouth and carry on? Because gummy bears are delicious! But man, what a long climb that was….

After recovering from my gummy bear sabotage, I was running along the short climbs and fun little descents that  traversed across the top of Ester Dome. As planned when I got to the entry of the section known as “The Chute”, I slowly and deliberately walked down the anomaly, as this is where in 2008 I managed to destroy both knees and take myself out of running for two years. The Chute is a sickly straight down drop of a little over 400 feet for less than a quarter of a mile before the trail turns casually into the trees and on to more sane ground.

Once beyond the Chute I allowed time for my knees to recover from the descent and ran very conservatively for a mile or two. After the Chute the trail is mostly a jeep trail blanketed by magical, yellow and gold-colored birch trees that eventually leads to dirt and paved roads which bounce back to dirt now and then. As I reached mile 19 I began stretching out allowing my legs to run a much longer gate and it was wonderful! In a blink I had gone from 9 and 10 minute mile paces to running low 7’s and 8 minute miles, it was wonderful.

With around three miles to go I settled down and returned to a more acceptable pace back in the 9’s to cruise out the remainder of the day after having vanquished all my self-proclaimed good natured enemies of the day. More and more I was seeing people on the side of the course that I knew and their cheering me on really propelled me further along with a smile I had been carrying with me all day. Talking to volunteers along the course and at aid stations, savoring every moment and breath as if tomorrow it will all vanish like a dream, I kept the joy alive when I crossed the finish line five minutes faster than last time I ran this race, I leaped into the air to celebrate a day I will not soon forget.