A couple of years ago I back packed the Kesugi Ridge, it has haunted me ever since. The trail left an incredible impression on me, even now I don’t stop thinking of it, I was thinking that one day I should run it.

And I have, from the Little Coal Creek Trail but not as much as I wanted. I wanted it all but that isn’t possible now, so I’ll do it in bits and pieces. The Cascades Trail, the most difficult trail to Kesugi Ridge leaves from Byers lake as a wonderful best friend, a hike that leads you through a beautiful forest and around the shores of Byers Lake. Just as you really begin to enjoy yourself, your best friend stabs you in the back and becomes your worst enemy crossing over Byers Creek the trail shoots straight up the mountain side for 2,500 feet of elevation gain over the next 2 and a half miles to no relief at all.

I began the run on the Cascade Trail as planned and on time (a rarity in my world) but upon arriving at Byers Creek the suspension bridge was gone and the only way across the swollen creek was to return to the trail head after running 2 miles, then having to traverse around Byers Lake adding 3 more miles to my run just to get 40 feet away from where I was standing  at that moment. The run around the lake would be beautiful but that wasn’t what I had planned for, Kesugi Ridge and running to Point Golog overlooking the beautiful Skinny Lake 8.5 miles away, not 12.5 miles away as the deviation would suggest.

I ran back to the car, loaded up and headed for the Ermine Hill Trailhead. I’ve never been on this trail since it has always been spoken of as nothing more than a bailout point along the Kesugi Ridge in the event of severe weather and emergencies as it is the half way point along the ridge. But today it was meant to be my salvation and save me it did! Technical, demanding and fun! Not as sustained as the other two trails but it still sucks the life from you from time to time. There was more running to be done for sure and less time spent bent over the trekking poles as sweat dripped from my head in small streams on to my arms.

Before I knew it, after the switchbacks, the wonderful little waterfalls, the incredible views I was making the final steep climb to the saddle. As I came out of the bushes that protect the hillside I arrived at an amazing alpine lake nestled in the saddle between the ridgelines that make up the halves of the great Kesugi Ridge. As with most of the lakes along the ridge, this lake was guarded all along its shore with bushes and boggs, so typical and poetic. Running above the inaccessible  lake was magical, breathing was easier and even the running seemed effortless. I climbed above the saddle heading to the south, stopping at the top of the valley to admire the view before turning around and back to the Ermine Hill Trail in the saddle.

With only 1,500 feet of elevation gain from the end of the first mile to the junction of the Kesugi Ridge 2.5 miles away it is definitely better access to the ridgeline but it does come at  cost. The trail meets up with the Kesugi Ridge at one of its most difficult points, in a saddle 1,000 feet below Stonehenge Hill to the north and a forested valley floor 1,000 feet below to the south before climbing out of it to traverse over another ridge line gaining access to Skinny Lake and Point Golog in the distance. Not today, I’ve wasted too much time and the day was lost but an amazing descent waits for me on a trail that is merely glanced at, but should be considered more for decent runs on the Kesugi Ridge, it was worth the thought and the effort. 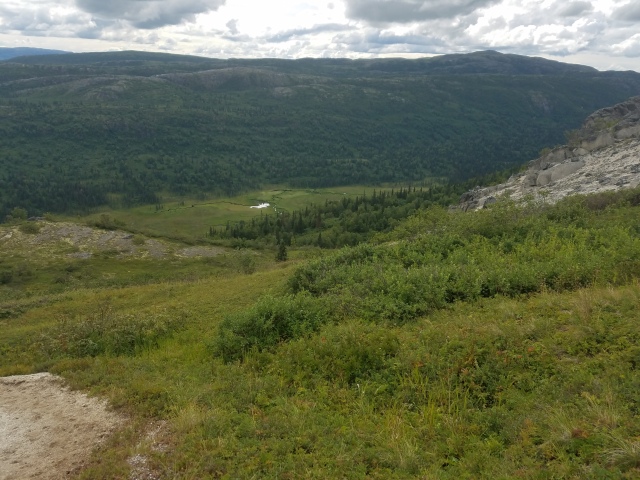