An hour of driving has led me to the Bandelier National Monument and to the heart of the ancient Yapashi Indian culture. The park visitor center was a visual confliction of images past and present, teaming with huge RV’s and milling tourists overshadowed by the cave dwellings lining the base of the cliffs bordering both side of the little canyon we have entered. I was amazed by the beauty of the area understanding why a culture rich in history chose this place to live. I feel the value of what was left behind has been lost by the people wandering around staring at guidebooks, wearing white orthopedic tennis shoes and out-of-place clothing.

My purpose for visiting this tourist infested oasis of cultural heritage was the 13 mile long Stone Lions Shrine Trail, also known as the Pena Blanca Trail and I’m not so sure which name is more accurate. Still, running this highly touted trail had been on my mind ever since I started researching trails in the Northern New Mexico area, Santa Fe more specifically. The weather was a perfect sunny and warm, I was so jazzed to get to running and exploring this high desert wonderland. All loaded up I hit the trail, the description in the guide book describes the beginning of the trail as a gradual  one mile ascent from the floor of Frijoles Canyon to the rim and to a gentle mesa. So as I began running up the trail the gradual almost flat nature of the trail didn’t surprise me to much but after a couple of minutes it dawned on me that I should be going up at some point and this wasn’t the case. After looking at a trail map I discovered that I had taken the wrong trail. Wrong way Chris strikes again! 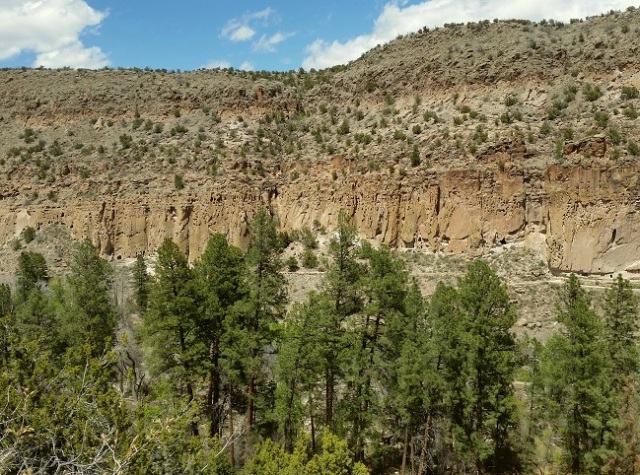 Having nearly ran all the way back to the car I found the Yapashi Trail and abruptly started climbing out of the canyon, gradual my foot! After a mile of running and power hiking up rock stairs and a fair amount of non gradual trail I hit the mesa and was stunned by the simplicity of desert trails, this is what I was searching for. The trail to the Stone Lions Shrine is actually called the Yapashi Trail which added to the confusion of what this trail is actually referred to since not a single sign mentions the shrine until you get further into the trail but for the moment, as I climb a short rock staircase out of a small ravine and head out across the desert the name of where I was running didn’t really matter anymore. 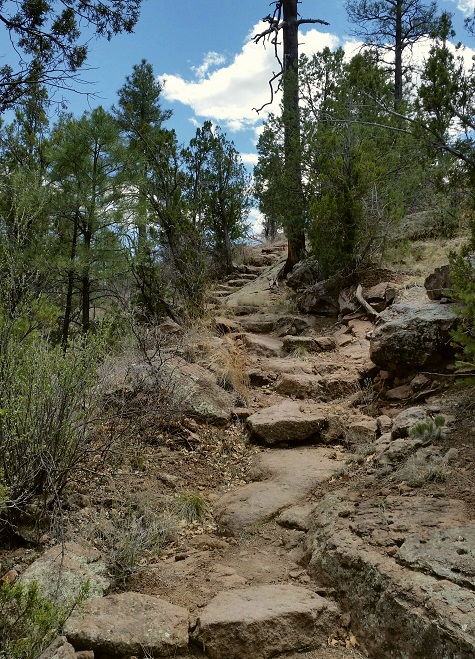 It felt amazing to feel the dirt under my feet, gliding along  the twisting and winding trail, rolling over small hills and depressions completely lost in my thoughts. Then Lummis Canyon came into view and I started down the rock steps that tested my still tired legs that haven’t quite completely recovered from a longer than expected race a few days back. Climbing out of the canyon I had mistaken Lummis Canyon for Alamos Canyon and thought I was further along than I was, but after a couple of miles of more incredible mesa running I was shown the error of my ways by the giant gash of the Alamos Canyon that suddenly brought me to a standstill on its rim.

Shit I have to run down into this and back up out of it twice?! The trail winds down the canyon wall for half a mile on a seemingly endless stone staircase, banging my knees around to no end and loses around 800 feet of elevation before climbing back out the canyon after a brief respite on the canyon floor. The stream in the canyon was my salvation, soaking my head in the cold water and washing the salt crusted sweat from my arms and legs. Refreshed, I headed downstream weaving around the wonderful Ponderosa Pine trees in search of an elusive cairn that marked the trail back up the other side of the canyon, God I dreaded the next part.

Familiar ground lays before me, hands on my knees,giant stone steps climbing on for ever, my head hanging low with sweat running down my face and the canyon floor never seeming to get much further away. And then the sun comes out from a small bank of clouds to intensify my climb from the Alamos Canyon, yeah! But just as I was really getting to  a point of physical exhaustion I saw a trail with no steps, it was actually getting easier and as I trudged on the rim came into view. The trail had rounded over the rim and placed me like a ship wreck victim swept to the shores of a desert island on a narrow mesa straddling two canyons. 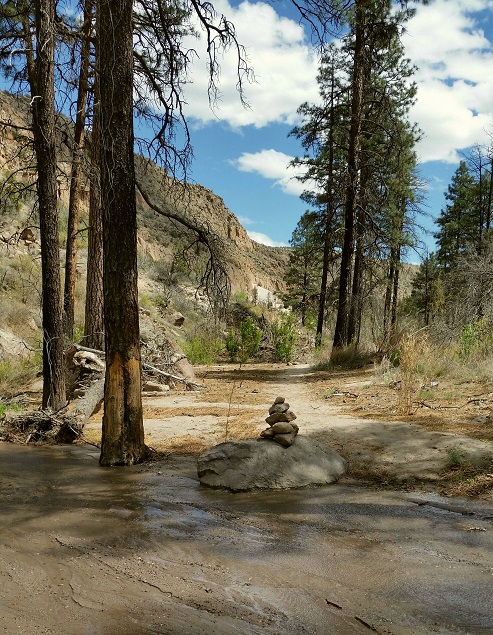 I was exhausted but the view was overpowering, I thought about turning back knowing that I was in no way going to make the time I thought I was, but I ran. The trail ran through stands of Juniper trees and gently climbed, etching its way towards the mountains. Suddenly I arrived at the site of the Yapashi Pueblo and I remembered the guidebook saying that the Stone Lions Shrine was a half a mile from the pueblo site, I was so excited to finally get to the lions. The site was incredible and knowing that the shrine is still in use by Native Americans for ceremonies I was doubly careful not to disturb anything. 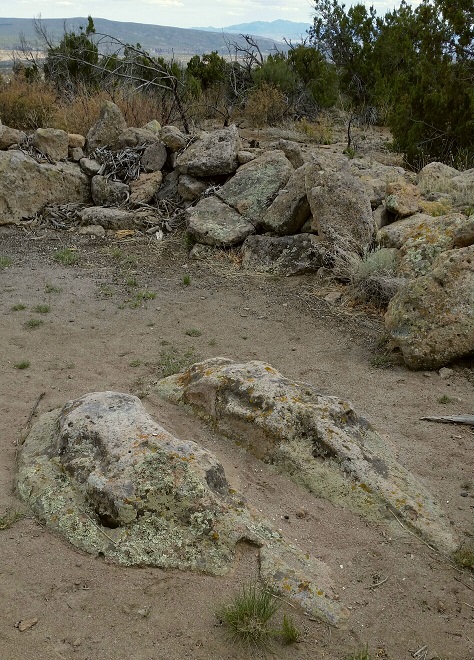 There was an amazing energy there, I could feel it and see it as the hair on my arms were standing up. When I finally turned to leave I felt very calm and relaxed, I ran. The run down the trail from the shrine was effortless, I was dodging yucca plants, jumping rock outcroppings, laughing and loving this special moment. The mile long run back to the rim of the Alamos Canyon was some of the most memorable trail running I’ve ever experienced. The euphoria would be over soon as I began the descent into the canyon as my legs were turning to jello, I had five miles to go and I had to climb back out of this thing!

By the time I reached the top of the canyon rim I was hurting, I couldn’t believe this was only a 13 mile trail and as I speed hiked from the canyon I ate a nutrition bar hoping to get some strength back. I was conserving as much energy as possible running across the mesa’s not trying to bomb them as I normally would, but coasting where I could just trying to get strength back in my legs. This time Lummis Canyon became a serious obstical with no strength left in my legs to climb out of the small canyon, I lowered my head and placed one foot in front of the other. At the top of the canyon I took a second to suck in some air and remind myself why I was running this trail in the first place, to explore and run in a very special and unique environment.

Slowly I began to run, I ran until I hit the rim of the Frijoles Canyon and a one mile descent to the car. Then with cramping hamstrings from electrolyte loss I flew down the trail again realizing that it was a beautiful day, a wonderful moment in my life and how lucky I am to be able to do these amazing things. As I hit the trailhead and parking lot I was exhausted, destroyed, nearly in tears with fatigue and I wouldn’t have had it any other way. When you go out to experience what you love most, leave it all out on the trail and bring nothing back but the love.